Darksiders Genesis, the fourth title in the Darksiders series, now has a release date for Xbox One, Playstation 4, and Nintendo Switch of February 14th 2020, making it a perfect valentine’s day gift for the avid gamer in your life.

Set before the events of the previous three games, this chapter seems to cross Diablo style dungeon crawling with the signature action gameplay of the rest of the Darksiders series. The perspective works well with the combat style of the series and pushes players to branch out from the previous game’s style. Veteran gamers will enjoy getting some background on the series’ events, while those new to the series will gain a solid foundation if they choose to move forward and play the remainder of this series games.

The horseman War returns as a playable character in this game, accompanied by the horseman Strife. This marks the first time in this series that the latter appears as a playable character, and the announcement was well received by fans. The dynamic between the two main characters is a study in opposites, and the contrast works just as well now as it ever has. In addition, their combat styles are complete opposites. War favors heavy, direct attacks at a close distance, while Strife’s style is a squishier ranged class.

The campaign itself runs around 15 hours long, and includes an increased difficulty mode for achievement hunters and completionists. Each boss features unique loot and challenges, but combat is definitely the main focus of this game. Occasional puzzles add to the challenge of defeating each new boss as you move through the levels.

Solo player mode allows players to switch back and forth between War and Strife, while co-op mode puts one player in each character. There is a local co-op game mode as well, which puts your characters in split screen. While this can be technically annoying as it severely limits what the gamer can see, it is a nice change from the typical style adopted by these consoles, which only allows online co-op play. Old school gamers should especially enjoy the nostalgia that comes from playing in the same room as your friends.

This solid entry into the Darksiders timeline will delight fans of the original series and new fans alike, especially those who have enjoyed previous dungeon crawl style games such as the Diablo series. With a lean field of upcoming titles, this game is definitely worth picking up and devoting some time to. 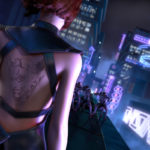